Paraffinic components, such as HVO and GTL, are practically free of aromatics, polyaromatics, olefins, sulfur and high boiling fractions. Cetane number of paraffinic fuels can be very high (EN 15940 Class A) or moderate (Class B). Therefore, remarkable benefits over standard diesel fuels are achieved, especially if regional diesel fuel contains considerably sulfur and aromatics. A large number of studies with paraffinic fuel components are available. These are carried out mostly with HVO or GTL paraffinic components, because other options, such as bio-origin BTL, are not yet commercially available. Paraffinic components can be different from each other, for example, regarding cetane numbers. In this Chapter, focus is given on high cetane paraffinic HVO/XTL (EN 15940 Class A).

Deposit formation in fuel injectors of engines is a phenomenon that shall be limited to a certain level in order to keep power output and low exhaust emissions constant over the entire life of a vehicle. Paraffinic HVO does not contain constituents that would lead to deposits in fuel injectors. HVO has shown a good performance in injector fouling tests.

Gill et al. (2011) reported that brake specific fuel consumption was lower for FT fuels than for diesel fuel in 83% of the reviewed publications, whereas higher in 17% of the publications. Paraffinic fuel's higher energy content (MJ/kg) and improved combustion efficiency leads to lower mass-based fuel consumption when compared to regular diesel fuel (Crepeau et al. 2009). However, this does not completely compensate the lower density of paraffinic fuels, and therefore volumetric fuel consumption increases compared especially to high-density summer grade diesel fuels.

In the review by Gill et al. (2011), 67% of the studies showed decreased tailpipe CO2 emissions with paraffinic fuels when compared to conventional diesel fuel. This is caused by the higher hydrogen content and by a slightly better engine efficiency for paraffins than for diesel fuel. In the studies with paraffinic HVO, tailpipe CO2 emission was reduced by 4-5% when HVO was compared to EN 590 fuel (Mikkonen et al. 2012). Mizushima and Takada (2014 IEA-AMF Annex 38) assumed that unchanged fuel economy with NExBTL and  reduced CO2 emission when compared with diesel fuel by ecoâ€driving was due to the area and frequency of use of the engine.

In AMF Task 52 report, non-road diesel engine was optimised for paraffinic diesel fuel aiming at increased engine efficiency without elevated emissions. With optimized parameters (rail  pressure  and  fuel  injector  start  of  energizing) for paraffinic  diesel  fuel , the  engine  efficiency  could be increased  appr. up  to 2% without any significant  drawbacks  in  emissions. In transient test cycle, NOx emissions slightly increased, however, this can be compensated with existing SCR systems. For reference diesel fuel, increased engine efficiency  by optimized  parameters  came with  the  penalty  of  increased  NOx and  PM emissions.

Tailpipe CO2 emissions correspond only to the tank-to-wheels part of a life cycle greenhouse gas emissions, whereas the bio-feedstock plays the major role in this respect.

Paraffinic sulfur-free fuels with high cetane number and low aromatic content result in significant emission reductions when compared to conventional diesel fuel. Clean combustion of paraffins is visualized in a simplified manner in Figure 2, which shows a comparison of conventional and paraffinic diesel burning in an open baker (The Alliance for Synthetic Fuels in Europe, ASFE). 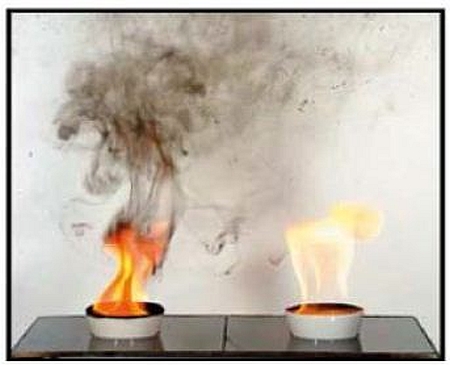 The effect of paraffinic XTL/HVO on regulated exhaust emissions is summarized in Table 2. Typically PM and NOx emissions reduce with the blending ratio of HVO even at small HVO concentrations

Despite of general reduction of emissions with paraffinic fuels, there has been also spread in the results with individual engines and vehicles. Some truck or bus types have shown reduction of PM emission up to 47% together with a negligible or even slightly increasing effect on NOx. This has been observed with common-rail engines, which do not have volume-controlled injection systems.Vice versa, in some engines NOx is reduced up to 14%, but PM is less influenced. One reason for increased NOx with some engines could be HVO's high cetane number, which may advance the actual start of the combustion and speed up combustion (Nylund et al. 2011). In the IEA-AMF Task 38, Phase 1, Sato et al. (2012) also assumed that high cetane number of HVO shortens the ignition delay and reduce the rate of premixed combustion, which would be prone to produce NOx. HVO did not increase NOx when compared to diesel fuel in the engine tests and in vehicle operation. In the Phase 2 of Annex 38, Mizushima and Takada (2014) observed that the BTL with an extremely low flash point and low initial boiling point had a tendency to increase the NOx emissions when compared to diesel fuel, while HVO and another BTL batch with relatively high flash points maintained the NOx emissions at the same level as diesel fuel.

Generally, the spread in results may arise from the differences of the type of fuel injection systems, engine calibrations and strategies for controlling exhaust gas recirculation (EGR) (Mikkonen et al. 2012). Kitano et al. (2007) considers that distillation range of GTL fuels is a significant factor as regards engine-out PM emission, whereas cetane number is important for HC and CO emissions. These fuel properties are not considered to affect significantly the NOx emissions. Clark et al. (2006) observed with an EGR equipped car  a slight NOx disadvantage for GTL. This was deemed to be due to lower EGR rate for low-density fuel whereas most cars showed low NOx with GTL fuel.

Methane, benzene, and toluene emissions reduced when paraffinic HVO was compared with regular diesel fuel in the tests with heavy-duty vehicles, whereas ethene and propene emissions increased.

The general trend in literature shows substantial reduction in PAH emissions when paraffinic fuels are compared to regular diesel fuel (IEA-AMF Task 31: Larsen et al. 2007, Munack 2010 in IEA-AMF Task 37). Particulate associated priority PAHs reduced 32-76% when HVO and GTL were compared to diesel fuel with four buses and three heavy-duty engines (Euro IV, EEV, one non-road Stage 3A) (Murtonen and Aakko-Saksa 2009). For passenger cars, priority PAHs were reduced with 85% HVO blend when compared to EN590 diesel fuel (Rantanen et al. 2005). In today's heavy-duty vehicles, emission level of priority PAHs is often below detection limit and differences between fuels cannot be distinguished. This was the case in the study with paraffinic and conventional fuels for the Euro III, Euro IV and EEV vehicles (Nylund et al. 2011).

Paraffinic HVO fuel has shown many benefits at cold temperatures: faster and easier cold start, less cold start smoke, less engine noise after a cold start (Mikkonen et al. 2012). In a study by Nylund et al. (2011), PM, CO, and HC emissions increased when using conventional diesel fuel when moving from +23 to  -20 °C, while these emissions were at the same level at both test temperatures when using  paraffinic HVO fuel. In the cold start tests at â€5 °C in the IEA-AMF Task 38 (Mizushima et al. 2012), a vehicle operated smoothly with HVO during the period of engine starting to an increase in engine coolant temperature. HVO had the equivalent cold startability as diesel fuel.

Studies with paraffinic diesel fuels are mainly conducted with engines and vehicles using factory settings. However, further benefits in engine performance, exhaust emissions and fuel consumption could be achieved by adjusting engine parameters to utilize properties of paraffinic fuels (Aatola et al. 2008). HVO can help with "PM – NOx" and ”NOx– fuel consumption” trade-off phenomena, which are challenges for engine designers (Figure 4). Favorable engine-out NOx to PM ratio with paraffinic fuels may give additional benefit in reduction of PM emissions with after-treatment devices (Nylund et al. 2011). In a study by Aatola (2008), NOx emission reduced remarkably with retarded timing, while fuel consumption increased. With advanced fuel injection timing, energy and fuel consumption were reduced, but NOx benefit was not obtained. The optimum combination could be advanced timing together with NOx reduction technologies. This issue is studied also by Kind et al (2010) by using paraffinic GTL fuel. “Diesel- flexible fuel vehicles (FFVs)” could be designed adapting themselves automatically in a similar way as FFV-cars today for gasoline blends. Another possibility could be changing engine mapping for fleet vehicles, which are using neat HVO. (Mikkonen et al. 2012).

A recent work within the IEA-AMF Task 45 concluded that HVO positively affects the combustion and emissions even if standard ECU settings are used. Moreover, HVO-adapted ECU settings showed a decreased fuel consumption without exceeding current emission limits. (Stengel and Vium 2015).

Crepeau et al. (2009) mentions that engine calibration to reduce engine-out NOx emission by taking advantage of low PM emission with paraffinic fuels may lead to excessive PM emissions with regular diesel fuel. This is not a problem for engines equipped with diesel particulate filters. However, adaptive systems, closed-loop control etc. would be needed when running with different fuels.

Various field trials with paraffinic GTL and HVO fuels were conducted before wide-scale market introduction. For example, field trials with GTL conducted with buses in  Shanghai , Beijing and the Netherlands  showed no need for extra maintenance during the trials and no fuel-related problems. No changes in driveability compared to standard diesel were observed. Most drivers registered the lack of diesel smell inside and/or outside of buses. (Clark et al. 2009).

Extensive field trials have been carried out on paraffinic HVO fuel in Finland, Germany and Canada (Nylund et al. 2011, Mikkonen et al. 2012). The fuel has performed well, both at 100% content and a variety of blending ratios even during severe winters. There have not been any problems or need for extra maintenance in fuel filters, fuel systems, fuel hoses, seals in fuel systems, engines or exhaust after-treatment devices. The same has applied for fuel logistics: no differences between paraffinic and fossil diesel fuel were observed regarding water, microbiological growth, storage stability or material issues.

HVO is used in for example in Finland, California, Sweden and Austria. In Finland, HVO containing diesel has been available since 2007, and today practically all outlets sell ”Neste Pro Diesel” containing at least 15% of HVO. This fuel meets the WWFC (2013) Category 5 specification for the most modern vehicles (Neste 2016). Wood-based paraffinic diesel, called UPM BioVerno, has been on market in Finland since 2014, produced by the Finnish pulp and paper company, UPM. The fuel production is based on using crude tall oil, a wood-based residue of pulping process. (Laurikko et al. 2014). HVO blends and neat HVO in Finland have been in place all year round including also severe winters for 10 years without technical modifications to vehicles, pipelines, storage tanks, tanker trucks and service stations. This experience has proven that HVO is a safe high-quality fuel option for the use without requiring any changes to fuel logistics or vehicles.

Annex 45
2013 – 2014 “Synthesis, characterization and use of hydro treated oils and fats for engine operation”,  Stengel and Vium 2015.
Download Report

Annex 37
2008 – 2011: “Fuel and technology alternatives for buses”, Nylund and Koponen (Eds) 2012. The most effective way to cut green-house gas (GHG) emissions is to switch from fossil fuels to efficient biofuels.
Download Report