Production side issues are not a part of this fuel information system. To mention, the IEA-AMF Task 45 (Stengel and Vium 2015), Task 34-1 (McGill et al. 2008) and Task 30 (Greene and Dawson 2007) studied production and sustainability aspects of HVO.

Paraffins are the most favorable components for diesel fuel. Paraffinic diesel has normally very high cetane number, no sulfur, nitrogen, oxygen nor aromatics. Paraffinic diesel fuel is a hydrocarbon fuel in a same way as conventional diesel fuel. Diesel fuel itself contains paraffins in addition to other hydrocarbon groups. However, diesel fuel contains also napthenics and aromatics, which are not so favorable for combustion. Paraffins are the most convenient type of hydrocarbon molecules from the point of view of clean and complete combustion in compression ignition engines.

Hydrotreating of oils and fats is a novel process for producing renewable paraffinic diesel, abbreviated HVO. In production, hydrogen is used to remove oxygen from the triglyceride vegetable oil or animal fat molecules. In addition, tall oil, a residue from pulp production can be used as a feedstock. Hydrogen needed for the HVO process is today made from natural gas, but it could also be made from biogas or other renewable sources. When comparing HVO and biodiesel (FAME) production processes it can be concluded that both need about the same amount fossil feed i.e. H2 for HVO and methanol for FAME.

Both processes, Fischer-Tropsch and hydrotreatment, can be optimized for different products/ compositions. Today, processes are optimized to produce n-paraffins and isoparaffins for diesel, some processes also produce cyclo-paraffins.

Paraffinic diesel fuel is specified in the standard EN 15940:2016, which covers hydrotreated HVO and Fischer-Tropsch GTL products containing up to 7,0 % (V/V) of fatty acid methyl ester (FAME). (Table 1). Paraffin content in this standard is at least 98.5 wt-%, which is controlled by limiting the aromatic and olefin contents to practically zero, as proper analysis method for paraffins do not exist. (Mikkonen et al. 2012). Two classes are defined with different cetane number ranges. Cetane numbers of paraffinic fuels depend on the ratio of n-, iso- and cycloparaffins.

Complete requirements and standards are available from respective organizations.

Table 1. Examples of properties of paraffinic HVO and GTL together with a standard. 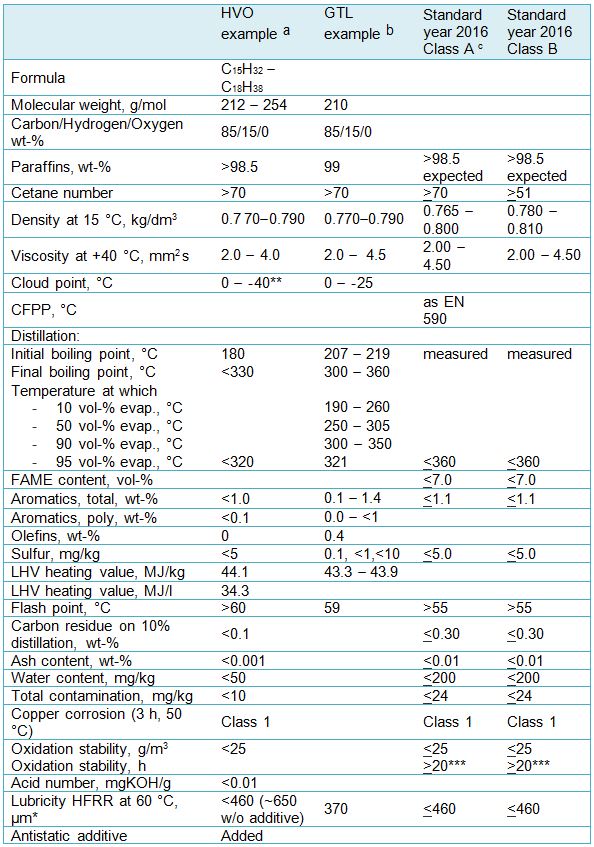 * Appropriate seizure protection shall be provided by using suitable fuel additives or by blending of minimum 2 % (V/V) of FAME.
** Cold properties can be adjusted ***Additional requirement, when FAME content is above 2 vol-%

Density of paraffinic diesel fuel is lower than that of conventional diesel fuels. Density has traditionally been a factor having a direct effect on engine maximum power output and volumetric fuel consumption. If density is reduced, heating value per volume decreases and engines need higher fuel volume in order to provide the same energy output.

Sufficient cold performance all the year round is an essential requirement for diesel fuel. Cold properties of n-paraffins are poor. However, the cold properties can be enhanced by an isomerisation process, which can turn a cloud point of HVO down to -40 °C. Even production of aviation kerosene is possible with paraffinic fuels. Nevertheless better cold properties than needed are avoided in order to achieve optimum profit–yield ratio. All HVO on market is not isomerized.

In a traditional diesel process, cold properties can be improved by distilling fuels to lighter fractions and by using cold flow additives. This leads to low density and viscosity of winter grade fuels, which may lead to reduced engine performance and higher volumetric fuel consumption. This is not the case with paraffinic fuels, such as HVO, because the isomerisation process does not change density or viscosity. Only the atoms are rearranged in isomerisation process.

The response of cold flow improver additives is not as good in paraffins as in traditional diesel fuels. Light and narrow distillation range of paraffinic hydrocarbons is not favourable for operation of the current cold flow additives.

By default, viscosity increases as temperature decreases. Viscosity of paraffinic fuels is close to those of conventional diesel fuels at cold temperatures. For example, the viscosity of HVO is about 15 mm2/s at -15 °C, and that of traditional summer grade diesel fuel around 20 mm2/s and of winter grade 6 mm2/s, respectively. Viscosity may also have an effect on cold operability in some applications. (Mikkonen et al. 2011).

Because of its nature as a mixture of n- and isoparaffins, HVO meeting the EN 15940:2016 Class A requirements has very high cetane numbers, from 70 to 95. Some other processes may result in paraffin mixtures with lower cetane numbers.

HVO as a blending component increases cetane number linearly. Natural cetane numbers of paraffins are thought to be more valuable than the benefit of cetane improver additives. For example, the benefit of additives is limited to about four cetane units, especially in winter grade fuels.

Cetane numbers of paraffinic fuels are typically higher than the upper limit of the measurement method with cetane engine. Thus high cetane fuel has to be blended with a known low cetane fuel and the cetane number is estimated by a linear extrapolation method. Consequently another test method derived cetane number (DCN, EN 15195) is more suitable for high cetane fuels. Cetane index is not applicable for paraffinic diesel fuels.

The sulfur content of paraffinic fuels is typically very low, for example for HVO coming out from the production process below 1 mg/kg. In many regions today sulfur limit of diesel fuel is maximum 10 mg/kg or 15 mg/kg.

Ash content of paraffinic fuels is low, for example for HVO below <0.001%. Bio-origin feedstocks may contain ash-forming elements, such as phosphorus (P), calcium (Ca), and magnesium (Mg). However, in paraffinic HVO and FT diesel fuels these elements are well below detection limits of the analytical methods (<1 mg/kg) since they are removed in the feedstock pretreatment unit. Low level of these elements allows ash-free combustion and long life time for exhaust after-treatment systems. (Neste 2016).

In temperatures above the cloud point paraffinic fuels are clear and bright, and they are not characterized by diesel fuel type odour. Color of HVO resembles water. Similarly to fossil fuels, paraffinic fuel becomes cloudy at temperatures below cloud point, and crystallized paraffins may settle during an extended storage.

Stability of paraffinic fuels is excellent, and no “use before” date is needed. This is an issue for applications, which are parked for extended periods, e.g. long-term parking, seasonal machinery, boats, emergency generator sets etc. As the new sophisticated fuel injection systems may be much more sensitive for deposits than older ones, the fuel stability even more important today than before.

Traditional stability methods used for diesel fuel are valid for paraffinic fuels, as well. This differs from oxygenated fuels, which may need special methods. For example, the oxidation stability “Rancimat” method designed for FAME is not valid for hydrocarbon diesel fuels, because this test may not find any exact point when the fuel loses its capability to resist oxidation.

Lubricity of diesel fuels are typically evaluated with the specified small-scale laboratory high frequency reciprocating rig (HFRR) test. More real-life 1000 hours test run with a fuel lubricated distributor type fuel injection pump has also been carried out for HVO paraffinic diesel fuel. This test is based on a CEC/Bosch procedure which runs a VE-type pump with injectors by an electric motor at varying loads at +60 °C fuel temperature. For the test HVO was treated with a minimum dosage of lubricity additive to achieve HFRR limit. After the 1000 hours test all inside parts of the pump were in good condition, and the overall rating passed the limit. Distributor pumps were used in the test, because they are sensitive for fuel lubricity. This pump test gives additional confidence on lubricity of HVO treated with lubricity additive. (Mikkonen et al. 2012).

Paraffinic hydrocarbons exist naturally in traditional fossil diesel fuels. Therefore, measuring the bio-origin paraffins (HVO, BTL) content of diesel fuel is challenging. Bioparaffin content of a blend shall be based on the seller's declaration and bookkeeping. If analyses of both blending components are known, for example density, ratio can be estimated by calculation.

If required, bio-paraffin content in a diesel blend can be determined by 14C isotope methods, which are also used, for example, for archaeological studies. CO2 in the atmosphere contains unstable 14C- and stable 12C carbon isotopes in a fixed ratio, and the same ratio is found from living plants and animals. Half-life of 14C is 5730 years, which can be used to differentiate fossil and renewable carbon. Principles can be found from the standard ASTM D 6866. 14C Methods do not belong to everyday laboratory practices at oil companies or authorities, but they can be used, for example in, the control checks. European Custom Administration has started Round Robin tests with these methods.

If a sample contains both FAME and bioparaffins (HVO), the amount of FAME is measured with traditional methods and subtracted from the total bio-content in order to find out HVO content. (Mikkonen et al. 2012).

Task 45
2013 – 2014 “Synthesis, characterization and use of hydro treated oils and fats for engine operation”,  Stengel and Vium 2015.
Download Report

Task 37
2008 – 2011: “Fuel and technology alternatives for buses”, Nylund and Koponen (Eds) 2012. The most effective way to cut green-house gas (GHG) emissions is to switch from fossil fuels to efficient biofuels.
Download Report