Although the price of crude oil has come down to a stable level, continuous energy security is still imperative worldwide. In the view for reduced environmental impact from vehicles and for relieved oil dependence, the expectation for DME (Dimethyl ether) is still large. Currently, DME is produced from coal and natural gas. If the techniques to produce DME using synthetic gases from waste paper fluid (black liquor) or wood-based biomass from unused wood including thinned wood can be realized, dramatic Well-to-Tank reduction of greenhouse gases would be achieved, and DME could be a most attractive next generation bio-fuel.

IEA/AMF had investigated a potential of DME as an alternative fuel for diesel engines through some Annexes such as Annex XIV, Annex XX and Annex XXVII from 1997 to 2004. Since there was no DME market for vehicles at that time, the investigations have made with some supposition that the DME market for vehicles will be established in the near future.

At the moment, China developed the DME market for vehicles and the production capacity reached 13 million tons. They are currently operating field test of ten DME city buses on the commercial bus line in Shanghai city. Sweden is now operating BioDME project in which 14 DME trucks will be run for field test. In Japan, two DME trucks are running with business license plate to make a technical regulation of DME vehicles. The situation has been changed and commercialization of DME fuel is being accelerated.

ISO started to discuss standardization of DME fuel through TC28/SC4/WG13 from 2007. The proposer of this new Annex is convenor of the WG13. The scopes of DME standardization can be classified as three categories: 1) feedstock for home and industrial use, 2) blend stock with LPG and 3) alternate of diesel for power systems including vehicles. The WG13 has a draft value of DME fuel specifications. However, it is not for final DME product for vehicles but for the base fuel to make any kinds of utilizations. Therefore, it is necessary to standardize the DME specifications for vehicles and it is the time to do by a new annex of IEA-AMF considering the current situation of DME fuel commercialization.

The subject of this proposed annex is "Investigation of DME fuel specifications for vehicles". The basic specifications will be referred from the draft value of ISO/TC28/SC4/WG13 (shown in table1). The main issues of the annex are as follows: 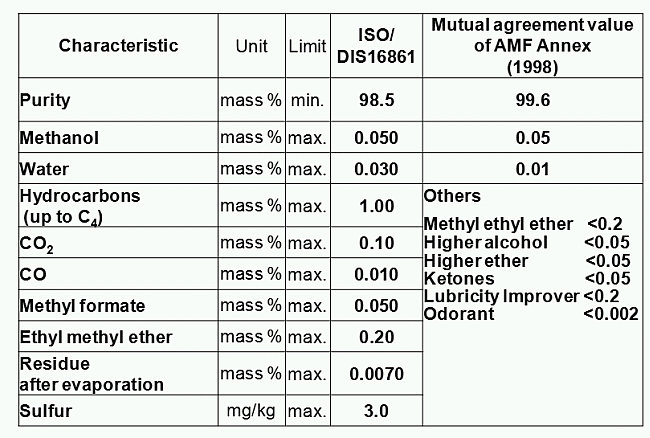 There are considerable activities to promote DME vehicles in the world, for example, China, Sweden, Korea and Japan. The proposer expected that these countries would participate in with task-sharing. Participants will investigate the effect of fuel impurities and additives on DME diesel engine systems and/or DME vehicles in their country individually, and then share the data and opinion each other. Especially, some critical issues such as limit of hydrocarbon number (up to C4 currently) and use of odorant will be discussed to gain a consensus among participants. The information will be referred to discuss the standardization of DME fuel specifications for vehicles (as a final fuel) which will be proposed as a new work item on ISO/TC28/SC4/WG13 in near future.

Examples of investigation items are as follows;