Production and sustainability aspects of biodiesel (fatty acid methyl esters, FAME) or potential feedstocks are studied in the IEA-AMF Task 45 (Stengel and Vium 2015), Task 37 (Nylund and Koponen Eds. 2012) Task 34-1 (McGill et al. 2008) and Task 30 (Greene and Dawson Eds. 2007). Use of biodiesel as a substitute diesel fuel is on the rise around the world. Volumes of biodiesel used and produced are growing very rapidly from nearly zero in just the mid-1990s to over 10 Mtoe in 2009 (AMF Annual report 2010). In 2015, global production of biodiesel was already 23.5 Mtoe (30.1 billion liters), which represents 22% of global biofuels production, while share of ethanol production was 74% (50 Mtoe, 98 billion liters) and of HVO production 4%, respectively (REN21 2016).

Such a rosy outlook for biofuels is not without technical hurdles, though. Esters from vegetable oils face some serious technical barriers that either require special measures to accommodate the fuels or limit their practical use in some climates at some blend levels. Among these barriers are poor oxidative stability, incompatibility with some elastomers, low-temperature flow properties, high NOx emissions, and competition for the same resources that are used in the food industries. If we are to achieve greater impact of bio-derived fuels, we must utilize all varieties of biomass feedstocks and produce a broader slate of fuel choices, ranging from gasoline replacements to diesel replacements. Therefore, the world’s attention is turning to concepts of more diverse manufacturing processes, and the notion of a flexible biorefinery is coming into being. Amongst these are paraffinic fuel options (HVO) (IEA-AMF Task 34-1: McGill et al. 2008).

Vegetable oils, animal fats, recycled cooking greases etc. can be transformed into biodiesel using transesterification (Figure 2). Oils and fats, which are triglycerides and/or free fatty acids react with alcohol to produce esters when using catalyst, which is typically sodium or potassium hydroxide. The side-product is glycerol (glycerine). So far, only methanol is used as alcohol in current biodiesel plants. Although also other alcohols have been studied, for example, by Lang et al. (2001) and Knothe et al. (1997). Processes and catalysts used today are optimized for methanol. Yields tend to be lower for higher alcohols than for methanol. Cetane number may increase with higher alcohols, as well as viscosity. In this section, only fatty acid methyl esters (FAME) are discussed.

Biodiesel esters can be made from a variety of vegetable oils and fats, including those presented in Table 1.

The oils and fats above are made up of 10 common types of fatty acids. All have between 12 and 22 carbon atoms with the great majority of them being between 16 and 22 carbons. Some are fully saturated, some monounsaturated (one double bond in the fatty acid chain), and some polyunsaturated (multiple double bonds in the fatty acid chain). The different feedstocks listed above are made up of different proportions of saturated, monounsaturated, and polyunsaturated fatty acids. This is illustrated in Figure 3. (IEA-AMF Task 34-1 McGill et al. 2008). 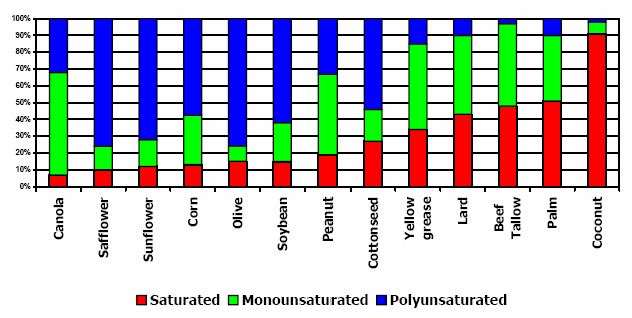 The different levels of saturation of the feedstock can affect the properties of the finished biodiesel fuel. This proves to be a significant factor when selecting the best feedstock for the particular application planned for the finished biodiesel fuel. This fact is illustrated in Table 1 below. In the table, general trends in three fuel properties, cetane number, cloud point, and stability, are shown to be related to the degree of saturation of the feedstock. Shown are typical fatty acids of different carbon content and different levels of saturation. The fuels from saturated fatty acids are generally better performing in cetane number and stability, and as the number of double bonds increase, performance in those properties generally degrades. (IEA-AMF Task 34-1 McGill et al. 2008).

The selection of feedstock has general effects on the product of the esterification process, i.e. biofuels. On the other hand, fuel properties, physical, as well as, chemical, affect the performance of engines, e.g. on engine cleanliness and deposit build-up. For the diesel engine, fuel parameters like ignition quality (cetane), density, boiling range, content of aromatic compounds and sulfur affect engine performance and emissions. Properties like viscosity, lubricity, and the content of impurities may be decisive for engine durability, and these properties can vary by region depending on the weather of the region.(IEA-AMF Task 34-1: McGill et al. 2008).

In order to assure that certain minimum requirements are met by the fuel, international standards exist for biodiesel fuels. The standards ensure that important factors in the fuel production process are satisfied. These include low sulfur content and absence of glycerin, alcohol, catalyst, and free fatty acids. Basic industrial tests to determine whether the products conform to standards are specified in the standards rules.

WWFC and two standards standards together with typical properties of RME are shown in Table 2.

Table 3. Example of FAME properties (Rapeseed Methyl Ester, RME) together with the requirements in the standards for 100% FAME. Complete requirements and standards are available from the respective organizations.

Energy density (energy per unit of volume) is the most basic of fuel properties, and it is one of the largest determinants of fuel economy, torque, and power delivered by the fuel. The energy content of petroleum diesel fuels can vary up to 15% between suppliers or between seasons of the year due to different refining parameters. Number 2 diesel (U.S.) usually has larger energy density than Number 1 diesel, and summer grade larger than winter grade. When compared to petrol-diesel the process of making the biodiesel (B100 if not blended with diesel fuel) has less effect on the energy density than the choice of feedstock. This results from the fact that the feedstocks for biodiesel do not vary as much as the crude oil does when making diesel fuel. Biodiesel as an oxygen-containing fuel (about 11% by weight), generally has lower heat content than petrol-diesel, and this results in lower power, torque, and fuel economy for B100. Figure 4 shows a comparison of biodiesel heating values for various feedstocks compared with petrol-diesel. (IEA-AMF Task 34-1: McGill et al. 2008). 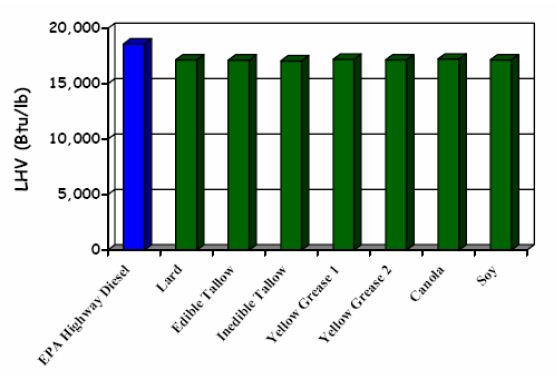 Cold properties of the fuel can have significant impact on whether the fuel, petroleum-derived or bioderived, can be used reliably in certain geographic areas and in the cold seasons of the year. Both petrol-diesel and biodiesel can freeze or gel at cold temperatures and, as a result, clog filters or become too viscous to pump thus disabling a vehicle. Cold flow properties of fuels are described with three different measures, namely cloud point, Cold filter plug point, and Pour point. It should be noted that the standardized test methods have been developed for petroleum products, and do not necessarily depict the true performance of various biofuels.

The cloud point for B100 is around 0 °C for most vegetable oil-derived biodiesel fuels, but it can go as high as 27 °C for biodiesels from animal fats and frying oils. Table 3 below shows the cold flow properties for various B100 biodiesel fuels made from different feedstocks. Note that there is not a great difference in temperatures between the cloud point and the pour point, which suggests that when the freezing process begins, it proceeds quickly to the point where the fuel is unusable. The cold flow properties of biodiesel can be improved with special additives, or by blending it with winter grade diesel fuel. (IEA-AMF Task 34-1: McGill et al. 2008).

Cloud Point: This represents the temperature at which the fuel begins to become visually cloudy; technically, this is the point where small solid crystals of fuel can be observed. The fuel can probably still be used at this point as long as the filters do not plug.

Simulated Filter Plugging Point (SFPP): This method resembles CFPP, but it is claimed to represent better the real cold operability than CFPP. The major differences between methods are the filter pore size and speed of temperature changes.

Generally, the cetane number of biodiesel can be affected by the choice of feedstock. Most of the biodiesel has cetane numbers higher than 47, in comparison to a lower limit for cetane number of 40 for highway diesel fuel in the ASTM D975-15 2-D grade, and respective limit of 51 used in Europe (EN 590:2014 standard). Thus biodiesel enjoys an advantage in cetane number over petrol-diesel in the U.S., but not in Europe. Highly saturated biodiesels, including those from animal fats and used vegetable oils can have very high cetane numbers, even as high as 70. In a sense this principle also applies to petro-diesel: paraffinic diesel yields high cetane number but poor cold properties, while aromatics are good for cold flow properties but not for cetane number. This issue is discussed also in the chapter of paraffinic fuels. Biofuels made from polyunsaturated feedstocks will generally have cetane numbers at the low end for biodiesel. Figures 5 and 6 below illustrate the varying cetane numbers and their feedstock makeup. Note that the nomenclature is Cxx:y – where xx is the number of carbon atoms in the feedstock and y is the number of double bonds. (IEA-AMF Task 34-1: McGill et al. 2008).

Distillation range of biodiesel esters is narrow. In addition, these esters are high-boiling compounds when compared to regular diesel fuel (Figure 7). This may lead into engine oil dilution and other problems as described in compatibility section.

Biodiesel esters are typically sulfur-free. However, they may contain trace elements that cause clogging of diesel particulate filters. In biodiesel esters, for example, potassium (K), sodium (Na), and phosphorus (P) may be present due to the feedstock or catalysts used in production process. Some of these elements are limited as such in the FAME standards, and also via (sulfated) ash analysis. (IEA-AMF Task 34-1: McGill et al. 2008).

Viscosity of FAME esters is high, and it increases with decreasing temperature (Figure 8). This may lead to problems when using FAME at cold temperatures. 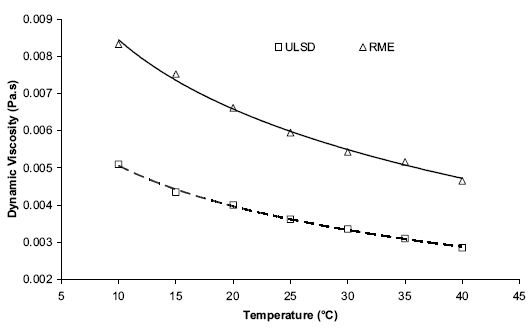 Fuel aging and oxidation over a long term can lead to high acid numbers, high viscosity, and the formation of residues and sediments that eventually could clog filters. Many factors can influence the degree of instability of the fuel.

A fuel with a higher level of unsaturation will oxidize more readily than a fully saturated fuel. For example, biodiesel ester composed primarily of C18:3 is 100 times more unstable than a fuel made of C18:1. EN 14214 standard limits polyunsaturated acid methyl esters of FAME due to this reason. The iodine number limit reflects the total number of double bonds, and therefore fuels tendency to form sludge. Rancimat oxidations stability reflects only acid forming tendency of FAME (WWFC 2009). High molecular weight glycerides and glycerin, which may be present as remnants from production process, may also cause filter plugging and engine deposits. (IEA-AMF Task 34-1 McGill et al. 2008).

When oxidizing FAME it forms peroxides and acids, which can damage or degrade plastics, elastomers and metals (WWFC 2009) and this is one substantial drawback. Acids may also be present as remnants from production process.

Water accelerates oxidation, increases corrosion and promotes microbiological growth. Biodiesel esters are polar and hygroscopic compounds with affinity to water. Thus it is especially important to dehydrate FAME in the production and minimize the contact with water in every handling step (WWFC 2009).

Antioxidants, whether resulting from the feedstock oil or the manufacturing process or from the additives introduced down the line from biodiesel production, can help to protect the fuel against degradation over time. Many vegetable oils and fats are produced with natural antioxidants and they remain in the fuel unless certain processes such as bleaching are used at the end of the production. Those processes will remove the antioxidants. (IEA-AMF Task 34-1 McGill et al. 2008).

EN 14214 standard recommends that stabilizing agents should be added to FAME immediately after its production, and at least before blending with petroleum diesel fuel. However, WWFC (2009) points out that overuse of anti-oxidants can lead to the additional formation of sludge.