In Sweden ethanol is used in the diesel combustion process in Scania’s ethanol engine by using ignition improver and lubricity additive. The first ethanol bus equipped with Scania’s engine started service in 1985, and in 2000 there were 407 buses running in Sweden. Now more than 600 buses have been supplied by Scania. Today ethanol buses are running also in other countries, for example, in Mexico, Australia, and Denmark.

In Sweden, standard SS 15 54 37 is specification for alcohols for high-speed diesel engines (Table 1). The standard does not include denaturants, ignition improvers or colorants. 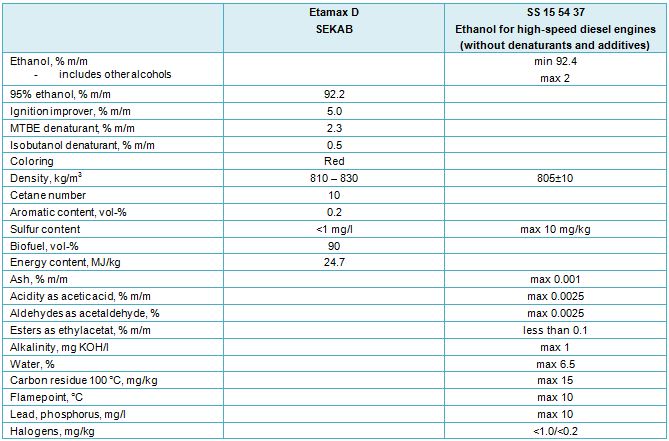 In IEA-AMF Task 46 (Nylund et al. 2016), new commercial ignition improvers for alcohol application in diesel engine (Scania concept) are now available, and two of these were studied together with a well-known ignition improver. The project showed that neat alcohols can be applied at very high compression ratios in diesel engines with the same performance as conventional diesel fuel. The performance was achieved by applying different ignition improvers in the form of new as well as a well known additive. Blends of alcohols and diesel showed a reduction in particulate emissions from a compression ignition engine with lower compression ratios.These new ignition improvers worked well with ethanol in a Scania compression ignition engine with a very high compression ratio (28:1). For methanol, the fuel system of the engine needs to be modified in order to manage the higher amounts of fuel flow needed due to the lower calorific value of the fuel. The relative specific fuel consumption measurements are shown in Figure 1. The injection timing needs to be optimized for the individual fuels (alcohol + ignition improver), since the rate of heat release was found to differ from one fuel to the other. Also the effect of the changes in fuel water content on the engine performance was studied. Decreased fuel water content increased both CO and NOx emissions, whereas adding water reduced both these emissions marginally in comparison with the commercial hydrous fuel. Applying the selective catalytic reduction (SCR) for NOx control would diminish the role water for NOx. In addition, different blends of diesel and alcohols, methanol, ethanol and butanol, were tested in another Scania heavy-duty diesel engine with a lower compression ratio (16:1). The addition of alcohols to diesel was found to decrease particulate emissions in general, and the gaseous emissions were unchanged, except at idle operation at which aldehyde, carbon monoxide, and hydrocarbon emissions increased. 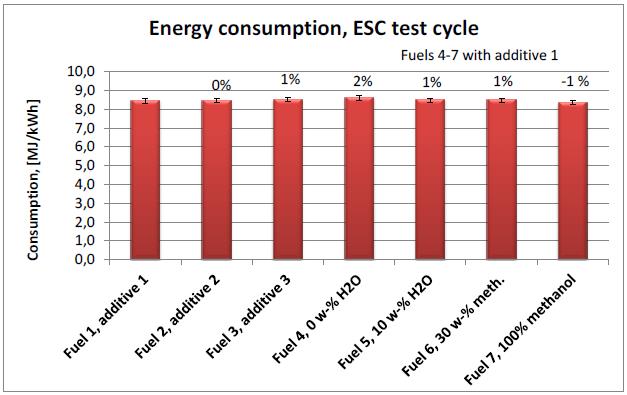 One part of the IEA-AMF Task 46 reported by Nylund et al. (2016) explored possibilities to reduce the additive dosing by injecting part of the fuel into the intake manifold. Using intake manifold injection, 25 % of the standard additive dosing was sufficient to achieve normal combustion (ignition delay and rate of heat release), however, at the cost of increased fuel consumption. Further testing to optimise, e.g. amount of pilot fuel and timing of main fuel injection, is needed to really show the potential of the concept. One way to take advantage of this concept would be to keep the dosing of additive as it is, but to reduce the compression ratio, thus lowering both mechanical stresses and costs for the engine. The Scania ethanol engine used for the testing was equipped with unit injectors. A common-rail fuel system would enable pre-injection without any additional hardware. A significant reduction of additive dosing might jeopardise cold starting.

Nylund et al. (2011) studied two trucks and one bus equipped with Scania's new generation ethanol engines; all with the 8.9-litre 270 hp ethanol engine. As reference, three diesel trucks (Euro V), three diesel buses and two CNG buses (stoichiometric and lean-burn) were studied. In general, the NOx emissions from ethanol vehicles were average, but PM emissions lower (buses) or significantly lower (trucks) compared to diesel vehicles without particulate filters (even 75% reduction in PM). The stoichiometric CNG bus showed lowest, whereas the lean-burn CNG bus the highest NOx values. PM emissions were higher for ethanol than for CNG average (Figure 2). Energy consumption of the ethanol bus was some 8% higher, and for ethanol trucks marginally lower, than the average diesel. It was noticeable that for the CNG buses energy increase was close to 40%, respectively. The conclusions seems to be quite similar with the new and older generation of ethanol vehicles: exhaust emissions from ethanol vehicles are close to clean diesel vehicles equipped with NOx and PM reducing technologies, whereas the sophisticated stoichiometric CNG vehicles are the cleanest. 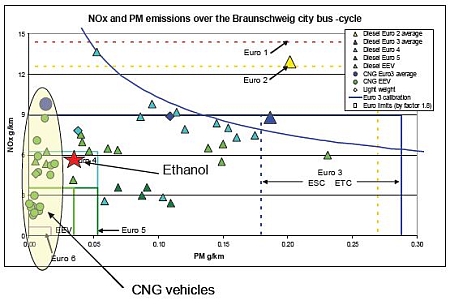 Figure 2. NOx vs. PM emissions for buses. The results with ethanol bus is marked with red star. (Nylund et al. 2011).