Ethanol is a monomolecular compound with narrow boiling range. Ethanol is aromatic-, olefin- and sulfur-free compound. Thus, ethanol may improve gasoline composition by dilution effect. Oxygen content of ethanol is 35%. About 10 vol-% ethanol represents 3.7 wt-% oxygen in gasoline. Most modern cars equipped with closed-loop control system can compensate leaning effect of gasoline containing low concentration of ethanol. Hydrogen to carbon ratio of ethanol is 3.0, whereas it is 1.85 for gasoline.

In the US, ASTM D 4814 is a specification for gasoline containing up to 10% ethanol (E15 waiver accepted for model year 2001 and newer cars). US EPA regulations allow 1 psi higher vapor pressure for blends containing 9 to 10 vol-% ethanol.

In Europe, Fuel Quality Directive 2009/30/EC allows maximum 10 vol-% ethanol in gasoline starting from 1 January 2011. Gasoline containing up to 5 vol-% of ethanol is available in European markets at least until 2013 for cars, which do not tolerate E10.

Typical properties of ethanol together with the selected requirements and recommendations are shown in the following Table.

Table 1. Selected properties and requirements for anhydrous ethanol, including EN 15376 and US ASTM D 4806. Complete requirements and standards are available from respective organizations. 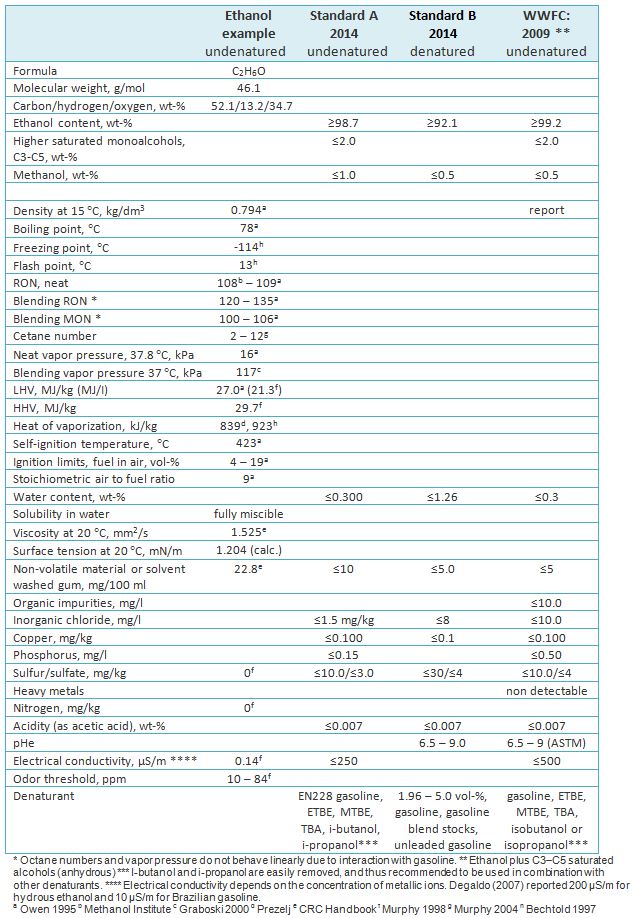 Octane numbers of low-molecular mass alcohols are high, and therefore they have been even used as octane boosters. Alcohols tend to increase the research octane number (RON) more than the motor octane number (MON). The blending RON of ethanol is about 120-135, and the blending MON 100-106. The sensitivity (RON-MON) is typically 8-10 units for gasoline, but 14 units for ethanol. The high octane numbers of ethanol could enable optimization of engine to increase the thermal efficiency. However, even special cars for ethanol use (FFVs) are still being a compromise to dedicated ethanol cars. Kalghatgi 2005 observed that knock sensor equipped cars performed better when using fuels with lower MON for a given RON. Ethanol increases octane numbers of the front-end distillation range of gasoline. When adjusting the octane number of ethanol/gasoline blend, octane numbers in the other distillation ranges of gasoline may need consideration.

Ethanol forms azeotropes with hydrocarbons of gasoline, which impacts volatility. In particular, the vapor pressure and distillation characteristics of ethanol/gasoline blends are non-linear. Blending vapor pressures for alcohols are significantly higher than their nominal vapor pressures. Vapor pressure of neat ethanol is low at only 16 kPa (Owen and Coley 1995). When ethanol is added into gasoline, vapor pressure increases with blending ratios of 5-10%, but then gradually declines (Figure 1). With ethanol content of some 30-50%, vapor pressure is at the same level as for gasoline without oxygenates (Environment Australia 2002, Furey 1985).

Vapor pressure of blends can be adjusted by using base fuel with low vapor pressure. If strict fuel specifications are to be met, this rules out the possibility of so-called splash-blending of ethanol. In some regions, higher vapor pressures are allowed for gasoline-ethanol blends, if they contain ethanol.

One notable point regarding the vapor pressure of ethanol blend is its tendency to increase more quickly than that of gasoline with increasing temperature. This phenomenon is illustrated in Figure 2 (Tanaka et al. 2006, referred by Wallace et al. 2009). 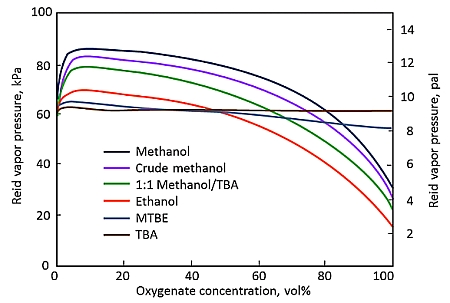 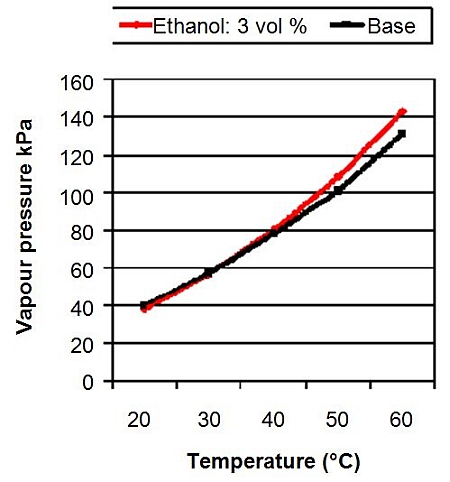 The distillation “front-end” increases more than predicted when ethanol is blended with gasoline due to azeotropic behavior of the blend. When ethanol up to 20 vol-% is blended into a hydrocarbon gasoline, the increase in volume evaporated at 70 °C (E70) is as much as 30%. The effect of ethanol on the other parts of distillation curve is smaller. (Stradling et al. 2009). The effect of ethanol on distillation in one experimental study is shown in the Figure 3 (Aakko-Saksa et al. 2011). With 10 vol-% ethanol-containing blend, there changes in the E70 value and a flat part of distillation may be challenging (Read more of drivability). 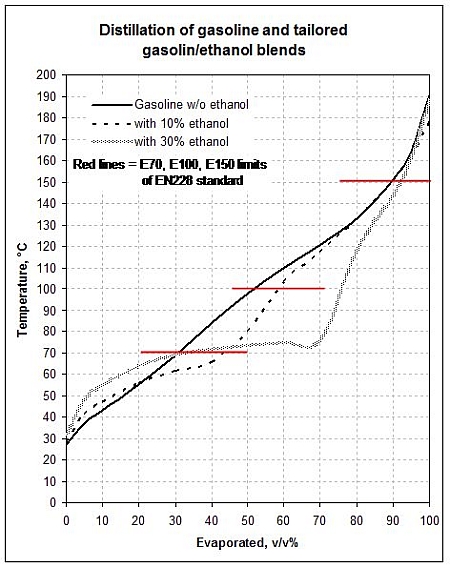 Heat of vaporization is higher for ethanol than for gasoline, which means that more energy is required to evaporate the fuel thus lowering the engine temperatures. This can improve knock resistance as autoâ€ignition is less likely to occur with a cooler engine. Cooling of the intake air may increase engine efficiency, because higher air density allows more fuel to be injected and internal and exhaust gas heat losses are lower. (Larssen 2009).

On the other hand, high heat of vaporization aggrevates the start-up with a cold engine due to cooling effect of the air/fuel mixture. The startability limit of neat ethanol is around +12 °C (Pettersson 1994). This problem can be reduced by using at least 15% gasoline in the fuel. The high latent heat of vaporization of ethanol leads to high emissions of organic gases (Chiba et al. 2010), whereas the low combustion temperature of ethanol may lead to a reduction in engine-out NOx emissions compared with gasoline. High latent heat of evaporation may even lead to frostbite in handling of ethanol in cold weather (Bechtold 1997). 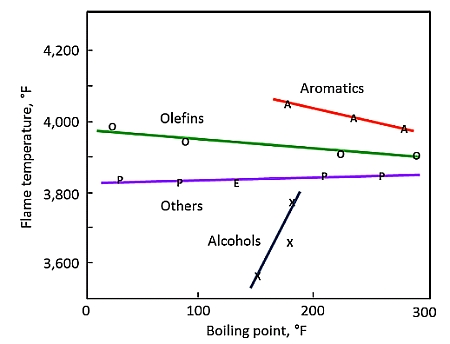 The energy content of ethanol is lower than that of gasoline. The heating value of ethanol is around 27 MJ/kg, in volumetric terms around 21 MJ/l, which is only 65% of the volumetric energy content of gasoline. This leads to higher volumetric fuel consumption with ethanol compared to gasoline. Theoretically, increase in volumetric fuel consumption is about 3.5% when a 10% ethanol blend is compared with nonoxygenated gasoline. If the advantage of alcohols’ high octane numbers is exploited by increasing the compression ratio of the engine, energy efficiency as kilometers per energy unit of fuel (km/MJ) can be higher for alcohols than for gasoline.

Density of ethanol is 0.79 kg/l, which is slightly higher than that of gasoline. Higher density improves volumetric fuel economy to some extent.

The oxygen content of ethanol is 35%. The oxygen content of fuel determines the stoichiometric air/fuel ratio, which is 9 kg air/kg fuel for ethanol, whereas it is 14.6 kg/kg for gasoline. Closed-loop fuel control system can compensate the leaning effect of fuel, but even the modern cars can tolerate oxygenates only up to certain concentrations. This is reflected in legislation and standards of gasoline.

Ethanol may reduce the olefins and aromatics contents of the gasoline pool by a dilution effect, depending on the properties of the base gasoline.

The storage and stability of ethanol blends are special issued due to ethanol's affinity for water and the risk of phase separation, which is harmful for cars and infrastructure. These aspects are discussed in the Chapter on compatibility. However, examples of
ternary phase diagrams are shown.

Reading instruction of the ternary phase diagram is shown in Figure 6. 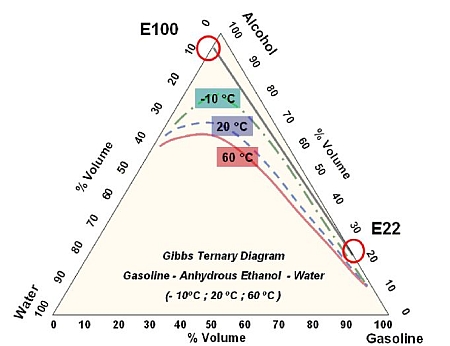 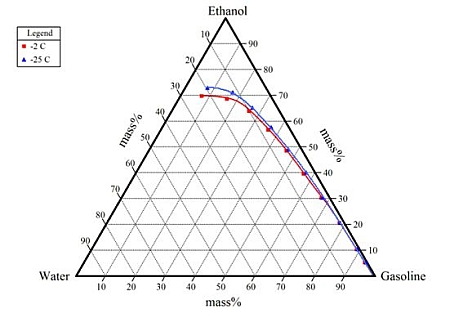 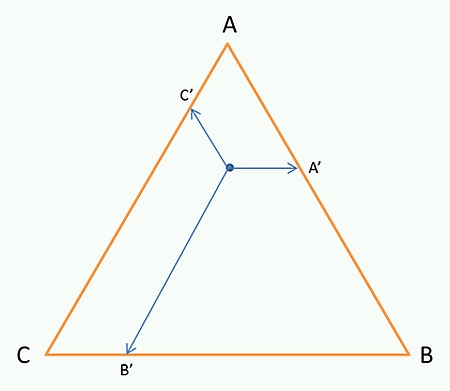 Ethanol can be manufactured from fossil or bio-origin feedstocks. Bio-content of a blend can be based on the seller's declaration and bookkeeping, and ratio can be estimated by calculation. If required, bio-content in a fuel blend can be determined by 14C isotope methods, which are also used for example for archeological studies. CO2 in the atmosphere contains unstable 14C and stable 12C carbon isotopes in a fixed ratio, and the same ratio is found from living plants and animals. Half-life of 14C is 5730 years, which can be used to differentiate fossil and renewable carbon. Principles can be found from the standard ASTM D 6866.