Conversion of alcohols to ethers, i.e. ethanol into ethyl tert-butyl ether (ETBE) or tert-amyl ethyl ether (TAEE) and methanol into methyl tert-butyl ether (MTBE) or tert-amyl methyl ether (TAME), produces gasoline components with excellent fuel properties. From the end-use point of view, ethers are preferred over alcohols as gasoline components. Octane numbers of ethers are high, and thus they have been used as octane boosters in gasoline. Vapor pressures of ethers are low, and blending with gasoline is predictable. Ethers are aromatic-, olefin-, and sulfur-free compounds. In past, MTBE was widely used as an oxygenate in the reformulated gasoline in past. At first, MTBE was introduced as octane booster. Then, widespread usage of MTBE was based on its capability to reduce exhaust emissions. Emissions reductions depend on oxygenate type, blending ratio, the operating conditions, engine characteristics, and many other parameters. CO and HC emissions typically are reduced, but NOx emissions may increase. Ethers are compatible with current car and fuel distribution chain. Water solubility of ethers is low and thus ethers do not carry phase separation risk or other water related problems.

Molecular structures of the most common ethers MTBE, ETBE, TAME, and TAEE are as follows.

Limitations for ethers are defined regionally in the legislation and standards for gasoline. In the U.S., gasoline-oxygenate blends are considered “substantially similar” if they contain hydrocarbons, aliphatic ethers or aliphatic alcohols other than methanol (up to 0.3 vol-% methanol or up to 2.75 vol-% with an equal volume of butanol or higher molecular weight alcohol). The fuel containing aliphatic ethers and/or alcohols (excluding methanol) must contain no more than 2.7 mass-% oxygen. This oxygen limit would represent about 17 vol-% ETBE content in gasoline. In Europe, the Fuel Quality Directive 2009/30/EC allows maximum 22 vol-% C5+ ethers in gasoline. Auto manufacturer's recommendations for fuel gasoline qualities in the WWFC 2006 edition states that ““Where oxygenates are used, ethers are preferred".

Typical properties of different ethers are shown in Table 1. 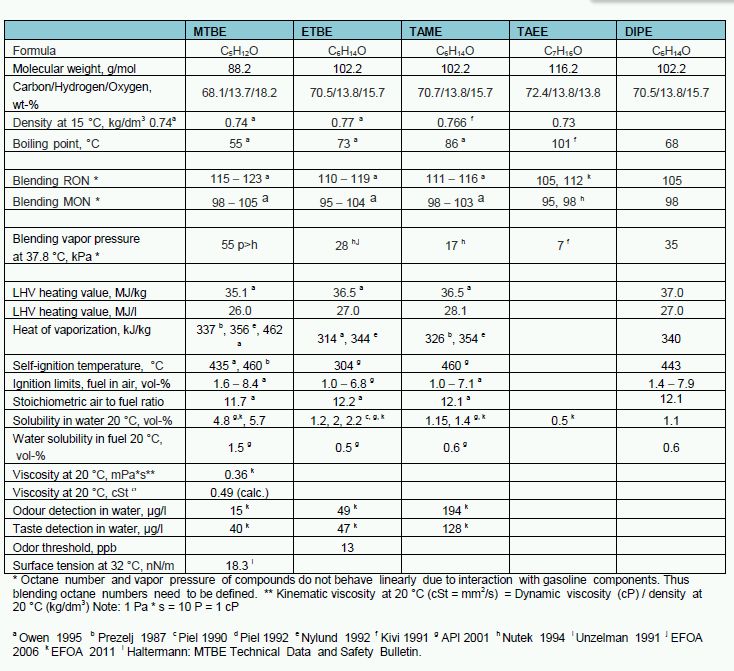 Gasoline consists of hundreds of different hydrocarbon molecules, whereas ethers are monomolecular compounds with narrow boiling points. Ethers are also aromatic-, olefin-, and sulfur-free compounds. Thus, they may improve gasoline composition by dilution effect. Refinery olefins are consumed in processing of ethers.

Sufficient knocking resistance, octane rating, is essential for proper operation of spark-ignition engine. Octane numbers of ethers are high, and thus they have been used as octane boosters in gasoline (Read more of octane numbers). For MTBE, ETBE, TAME, and TAEE blending research octane number (RON) is 105-123 and motor octane number (MON) 95-105. Alcohols tend to increase more RON than MON, while both octane numbers are excellent for fuel ethers (Figure 2).

Vapor pressures of ethers are low (Figure 2.) and ethers do not have azeotropic behaviour with gasoline and thus blending is predictable as regards volatility properties. This is a benefit for ethers when compared to methanol or ethanol (Wallace 2009).

Ethers affect mid-range distillation by increasing volume of distilled at 100 °C. On the other hand, heat of vaporization is at the same level for ethers as for gasoline, which may diminish the effect of ethers on driveability and cold-start emissions. According to Wallace (2009), addition of ETBE in the mid-range distillation could improve vehicle warm-up during cold engine operation without any drawbacks in hot driveability performance. 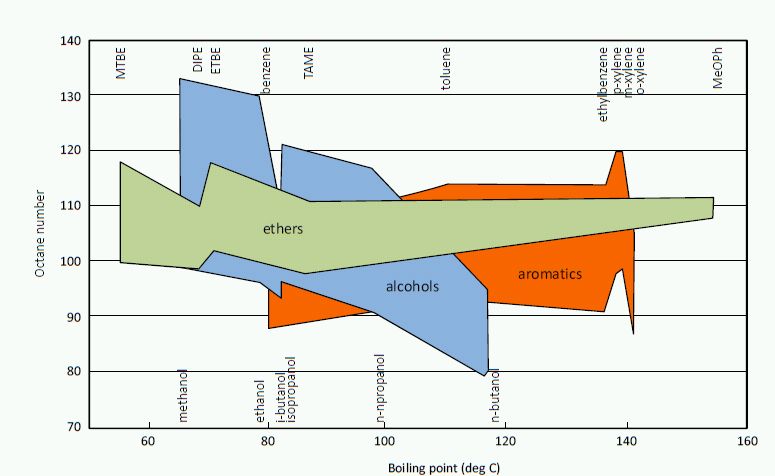 Figure 2. Octane numbers as a function of boiling point for oxygenates and aromatics (Oil Gas 1991).

Ethers are compatible with current car and fuel distribution chain. Water solubility of ethers is low and thus ethers do not carry phase separation risk or other water related problems. Normal pipelines and procedures can be used for handling of fuel ethers. Ethers have been used for decades as gasoline components.
Compatibility of fuels with elastomers can be evaluated by volume swell in long term immersion tests. Engine manufacturers have different criteria for different materials. Generally swells less than 20% are acceptable. Wallace et al. (2009) has reviewed material compatibility of ETBE. One study referred was conducted by ARCE Chemical Company in 1990 by using 13% MTBE, 13% ETBE, and neat ETBE fuels. ETBE resulted in less swell than premium gasoline for all elastomers studied except for Viton A, which only experienced a small change. 13% MTBE resulted in slightly higher swelling than 13% ETBE. Wallace et al. (2009) refers to DuPont’s data, which includes elastomer compatibility results with MTBE, TAME, ethanol, and ETBE. In general, ETBE showed the lowest seal swell. Higher swelling is observed for ethanol and MTBE. According to Wallace et al. (2009), swelling was not observed in a study by Japan Auto and Oil industries with elastomers studied.

Many ethers tend to form peroxides and stability inhibitor additives are recommended for those ethers.

Wallace et al. (2009) reviewed drivability and emission tests with ETBE. One drivability study reviewed was carried out with ETBE and ethanol containing fuels at 2-4.3 wt-% oxygen contents in early 1990’s by Neste Oil. All fuels had good starting properties. The cold weather drivability performance of multi point injection car (model year 1993) was excellent with all fuels tested. In hot weather driveability tests, demerits generally increased with increasing test temperature. However, the differences between fuels were negligible.

Refuelling loss evaporative emissions were not increased when vapor pressure was tailored to the same level with fuels containing 3 or 10 vol-% ethanol or 8 vol-% ETBE. Running loss emissions with ethanol tend to increase more than with gasoline, even though vapor pressures of fuels were at the same level. However, this is not the case for ETBE. Another study showed increased diurnal breathing losses with ethanol, but not with ETBE (3% ethanol or 8% ETBE blends). This was concluded to be due to differences in permeation abilities of fuels. (Wallace et al. 2009, Tanaka et al. 2006, 2007).

Arteconi et al. (2011) conducted literature review on oxygenates, including MTBE, ETBE, TAME, TAEE, and diisopropyl ether (DIPE). As concerns exhaust emissions, a number of studies referred were from 2000’s: 11 studies on MTBE, two studies on ETBE and TAEE each, and one on DIPE. Studies on TAME were from 90’s. Generally, all fuel ethers reduced harmful emissions depending on oxygenate type, blending ratio, the operating conditions, engine characteristics, and many other parameters. Some specific observations of this review are as follows:

All in all, the effect of fuel ethers on the exhaust emissions in the new studies seems to follow general trends observed in 90’s. A summary of the older studies is shown in Figure 3. 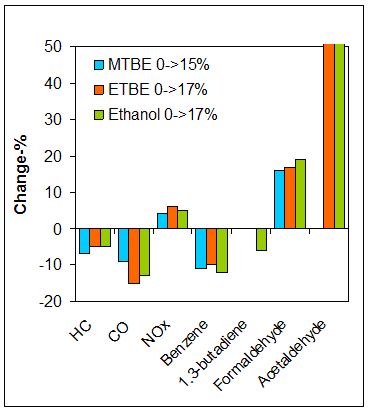 Figure 3. The effect of MTBE, ETBE, and ethanol on exhaust emissions. Change-% represents difference in emissions when oxygen containing fuel is compared to non-oxygenated fuel (Aakko 2000).

API (2001) Alcohols and Ethers – A Technical Assessment of Their Application as Fuels and Fuel Components. API Publication 4261. 3rd Edition, June 2001.