Gasoline consists of hundreds of different hydrocarbon molecules, whereas butanol isomers are monomolecular compounds with narrow boiling point. Butanols are aromatic-, olefin-, and sulfur-free compounds. Thus, they may improve gasoline composition by dilution effect. Oxygen contents of butanols are 21.6 wt-%.

There are four isomers of butanol with the same chemical formula, but different structural arrangement. Isomers of butanol are n-butanol, isobutanol, tert-butanol, and sec-butanol. In past, “gasoline-grade” tert-butanol (GTBA) was commonly present in gasoline as a co-solvent for methanol, denaturant for ethanol and as impurity in MTBE, if produced from TBA. TBA solidifies at about 26°C, and thus co-solvents are needed for handling and usage. (API 2001). Today, bio-based isobutanol and n-butanol are considered as blending components for gasoline.

In the US, gasoline-oxygenate blends are considered “substantially similar” if they contain hydrocarbons, aliphatic ethers, aliphatic alcohols other than methanol (up to 0.3 vol-% methanol or up to 2.75 vol-% with an equal volume of butanol or higher molecular weight alcohol). The fuel containing aliphatic ethers and/or alcohols (excluding methanol) must contain no more than 2.7 mass-% oxygen. This oxygen limit would represent about 11.7 vol-% (12.5 wt-%) isobutanol content in gasoline.

In Europe, Fuel Quality Directive 2009/30/EC allows maximum 15 vol-% butanol in gasoline. Isobutanol and tert-butanol are mentioned separately, other butanol isomers are covered by the group of “other oxygenates”, which means “other monoalcohols and ethers with a final boiling point no higher than stated in EN 228”. About 16 vol-% (17 wt-%) of isobutanol would represent gasoline oxygen content of 3.7 wt-%.

Automanufacturer’s recommendations for fuel gasoline qualities in the WWFC 2006 edition state that “Higher (C > 2) alcohols are limited to 0.1% maximum by volume.” Based on this statement butanol isomers are excluded as gasoline components.

There are no fuel requirements or standards for fuel butanol at the moment. Typical properties of butanol isomers are shown in Table 1. 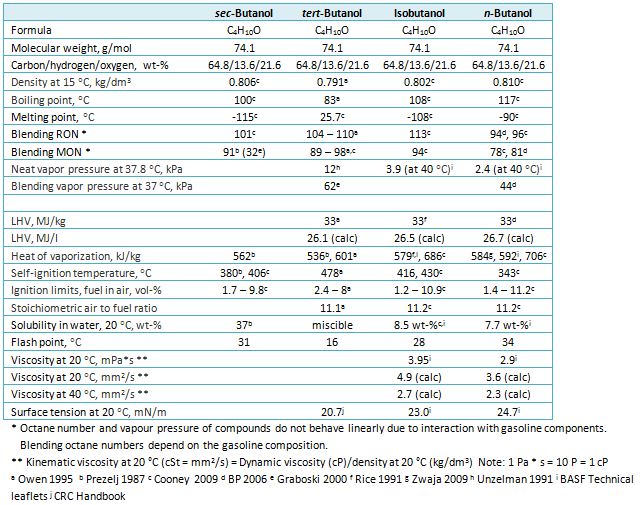 Melting point of tert-butanol (TBA) is about 26°C (Table 1). However, in past TBA was commonly present in gasoline as a co-solvent for methanol, denaturant for ethanol and as impurity in MTBE. Melting points of other butanol isomers are below -90°C.

Alcohols tend to increase research octane number (RON) more than motor octane number (MON). The sensitivity (difference between RON and MON) is typically 8-10 units for gasoline, while over 10 for butanol isomers. Blending MON is particularly low for n-butanol.

Butanol has a lower blending vapor pressure than ethanol. Basically, butanol does not significantly increase vapor pressure of gasoline at any blending ratio (Figure 3). 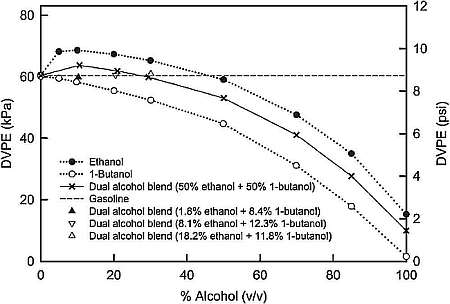 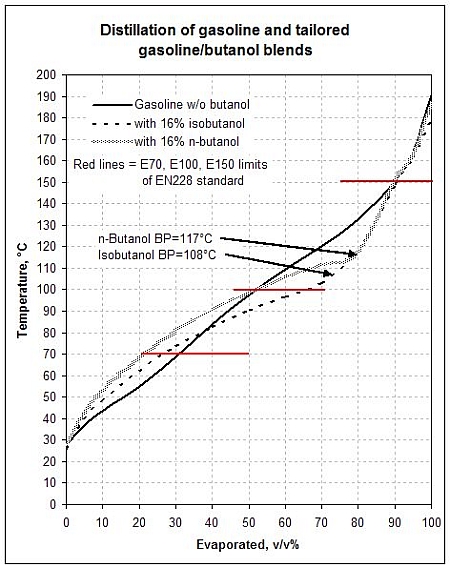 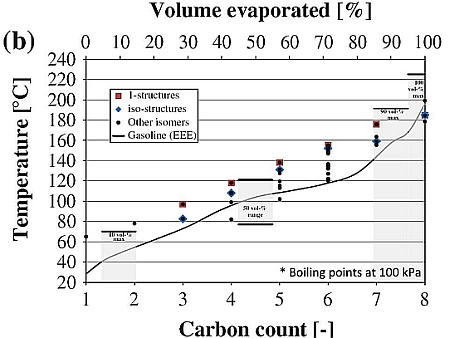 Heat of vaporization is substantially higher for ethanol than for gasoline. Higher heat of vaporization improves knock resistance and enables achieving higher engine efficiency, but also leads to problems to start up and to run the cold engine. (Larssen 2009). Heat of vaporization of longer chain alcohols, such as butanol isomers, is closer to that of gasoline compared to ethanol (Figures 6 and 7). Driveability with butanols is discussed in the later Chapter. 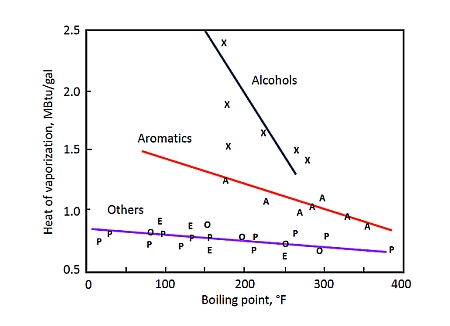 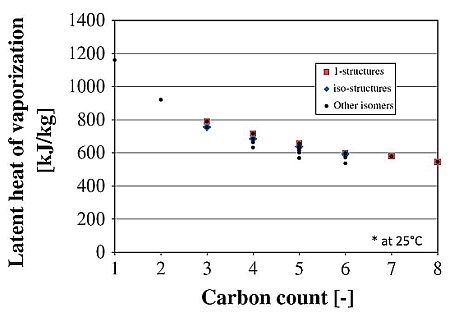 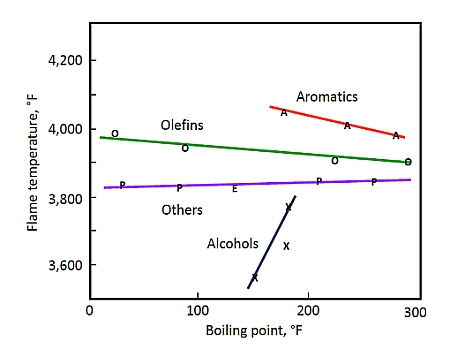 Butanols are not as polar compounds as ethanol. tert-Butanol is miscible with water, but solubilities of other butanol isomers are limited. Solubility of sec-butanol in water is relatively high, whereas solubilities of isobutanol and n-butanol are only around 8 wt-% at 20 °C. (BASF Technical leaflet). Isobutanol or n-butanol are not prone to migrate into water phase from gasoline in normal conditions.

Viscosities of butanol isomers are high when compared to gasoline. Viscosity of n-butanol is 2.7 mm2/s at 40°C, and that of isobutanol 2.3 mm2/s. These are close to viscosities of diesel fuel. For example, viscosity limits in the European diesel fuel standard (EN 590) are 2.0-4.5 mm2/s.